Videogames that I have played in the past and what they say about me.

I make no secret of this. I play videogames. I have played videogames since sometime after my sixth birthday. One day whilst I was on my way home from school with my still very young mother, she told me cryptically that my male parent had something at home that I would like to see. That something turned out to be a Commodore VIC-20, the first of what is now many, many computers that have passed through the households I collective have and continue to reside in. Being that this was 1984, the price of a VIC-20 was likely quite cheap, and the machine turned out to be a source of entertainment enjoyed by the whole family as a collective. But whilst I was at the time mildly interested in the programming and creative aspects of the device, I got the games in a big way.

I did not know this at the time, but in the previous year, the Commodore 64 had been “unveiled”. Although it suffered reliability problems at first, by 1984 its greater flexibility and capability, along with its greater visual and aural capabilities (do not laugh) meant that the VIC-20 was quickly headed for retirement. I do not recall exactly what year my family traded in the VIC-20 for what came to be referred to in shorthand as the C64, but it probably did not take long. Now, by greater visual and aural capabilities, well, obviously by today’s standards that is a pretty sick joke. But the Commodore 64 could give brief real-time voices, constant music that, although low in quality, put the player right into the mood of the game, and crude representations of visual elements that in 1982 matched or even exceeded those of arcade machines. If you can imagine a bass voice saying “Another visitor. Stay awhile… stay forever!” in exaggerated tones, then you can sort of get the idea of my first impression of the Commodore 64. 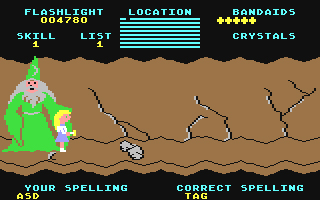 However, as time dragged on and my efforts to integrate myself with the social group I was thrust into failed, I found myself going to this new source of distraction or entertainment with ever-increasing dedication. Increasingly over time, I began to monopolise it. Homework went undone, reading, although still done as an exercise, was mostly confined to the screen of the computer. Mathematical learning became more sluggish than a drunken slug. And mind you, this was in spite of all of the so-called educational programs that were made available to me on this great little machine. I still would rather make love to a powerpoint than add more than four lots of two digits together. No educational supplement, even ones that were pushed upon both myself and my sister by the “you have to be able to add fifty four-digit strings of numbers together or you’re not gooooooooood [say it with the proper baby-like emphasis in the middle, after all]“ crowd, could change that. And it did not.

But games like Cave Of The Word Wizard not only let this little boy learn a multitude of words they would not let us in on at school for at least another year, it also clued him in on the fact that not everyone spoke, or wrote in, his native language in exactly the same way. The game was clearly programmed by Americans. And unlike what happens in today’s market, when a programmer chose to program a game to reflect their own linguistic knowledge, thus making any spelling other than American incorrect, users were stuck with it. Hence, one had to internalise the fact that where the game’s makers came from, certain answers were expected. Clever lesson in how just because we both speak English does not necessarily mean we speak the same language? You be the judge. Also noteworthy is how Cave Of The Word Wizard phrases the lessons it teaches. Failures to correctly spell the word that the wizard gave as a key to plot progression were gently pointed out, not an excuse to tell the child how stupid they were or such, like some examples I could point out. If more work had gone into developing software so that home computers could completely replace formal schooling, who knows what might have happened?

I had that Commodore 64 for the longest time. It kept working reliably (by Commodore 64 standards, I mean) for the best part of ten years. The only reason I do not wish I could go back to it now is because between then and now, by means I neither properly remember nor wish to talk about, an upgrade to the Commodore Amiga was made. I will not get into the history of that computer here, other than to say that I miss the Aegis Sonix music composition software so badly that sometimes I wish I could buy a new Amiga. But suffice to say that my cries for a structure to promote my creative instincts were still going unmet. But I digress. One of the games I remember most from that era, other than Moonstone (which is literally so utterly awesome it deserves an entry of its own), is Heimdall. Heimdall was an example of how multimedia was being used correctly to supplementa game on the Commodore Amiga. By correctly, I mean it was being used to supplement the mood of the game rather than take the place of gameplay. 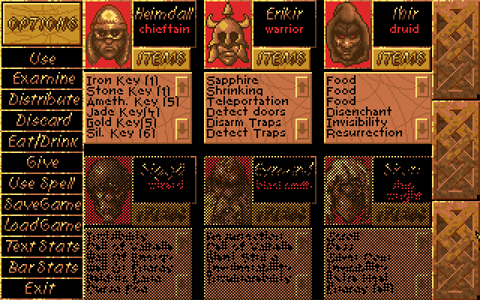 Whilst Heimdall was an enjoyable game that frequently took me away to something beyond my experience as a then no longer so little boy, it was not without its problems. Although the charges on one writing that the game is mediocre in its design and that the player’s attention is more often focused on coping with the interface than the content are true, the game did manage to provide a bit of refuge from the emptiness of a neglected autistic teenager life. And that is an important point in game design that modern programmers seem to have a habit of forgetting lately. Games are not meant to be realistic, or impressively graphical, or immersive in sound. They are meant to offer the player a refuge from reality. At .23, Sweden has the lowest (or best) Gini coefficient of the world. By comparison, this map by groupings shows that Australia, America, and England are either fractionally higher or around double. The nations that do worse than America (itself the worst of those three in this respect) are in anarchy or close enough thereto as makes no odds. In a world where income inequality in the English-speaking nations is nearing twice that of the Scandinavian nations, being far enough outside that nobody recognises how outside you are is somewhat like being in hell. Escaping that even only in mind is a joy.

And as I played games more and more, I began to discover that those which allowed me to assume the role of a character other than myself or a generic hero brought me the greatest escapes. And so I began to delve deeper into the genre, and began to really pay attention to the designs of games that incorporated elements thereof. Observing the effects of increasing my strength or stamina in a game, combined with the effects of acquiring better in-game items, became almost as much a pastime as playing the damned game. Games like Eye Of The Beholder and its sequels even allowed one to create a group of custom characters with differing attributes, although the day when a computer game allows the same extent of customisation of one’s character as the Dungeons & Dragons tabletop game has yet to come.

Type O Negative had a song called I Don’t Want To Be Me. If this little tale has not clued you in on anything else, then this hint should fill in one of the blanks. Let me give you a hypothetical. You are waging a campaign to make the people abusing you stop. And in an abstract way, you find yourself with an option to be a Dwarvish warrior for a few hours at a stretch. Or you can go back to being a teenage boy whose immediately company frequently only understands his requests for respect of his personal space when such requests are punctuated with his fists. Or worse. So the question is, who the fukk in their right mind would choose the latter over the former?

If you understood the point of all that, and I do not mean the one about how much the videogame industry has (d)evolved since 1982, then thank you for reading. More on this topic shall follow.