Appreciating the classics: a look at Scanners

Scanners was one of the films that made the film industry recognise David Cronenberg as a unique voice in filmmaking. But by all rights and laws, it most certainly should not have been. In fact, one element aside, what is a unique and interesting story is all but pissed away by several elements that have a uniquely Ed Wood-ian feel to them. In the interests of giving Cronenberg his proper due, I am going to talk about what went wrong first. This will also give a better sense of what went right in the film. 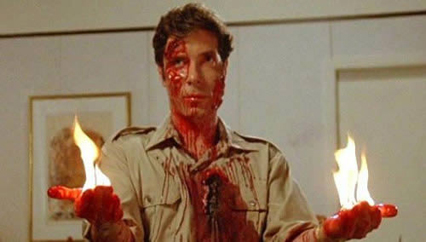 The manner in which Scanners was financed left it open to some serious interference with certain aspects of the production. One such element was the casting of Stephen Lack (pictured) as the primary protagonist, a man going by the name of Cameron Vale. I will not link to Mr. Cranky’s review here because for reasons that have persisted for far too long with a site that is meant to be a commercial enterprise, loading the site usually brings a continuous stream of coding errors. But Cranky points out, correctly, that Scanners‘ claim to fame mostly rests on two things. The first is a scene in which a man’s head explodes (and this scene is awesome beyond words). The other is Stephen Lack‘s performance, which has caused acting tutors all over the world to redefine the art of acting by using Stephen as an example of what it is not. You can defend Stephen in many scenes by stating that his flat, emotionless performance is pretty consistent with how the mentally ill felt whilst under the influence of many of the medications designed to “stabilise” them. Melaril being a particularly cruel example thereof. But Lack is completely emotionless even in scenes where he should be roused to anger, or more.

END_OF_DOCUMENT_TOKEN_TO_BE_REPLACED

Hobo With A Shotgun is awesome

Last year, a few days before the holiday I love to refer to as MoneyMas, I finally had the chance to partake in a film that I had been wanting to see for pretty much the entirety of the year. Unlike a lot of slick, A-grade productions, Hobo With A Shotgun makes no promises, false or otherwise, about what it contains. It is about a hobo who, upon finding himself in a town so corrupt that the National Guard should be there en masse, buys a shotgun and goes about killing every example of corruption and injustice he can find.

Let me put it this way. You know a film is a keeper when, less than ten minutes in, a man’s head is severed and creates a geyser of blood in which a woman wearing a bikini and a fur coat decides to start writhing around. Yes, it is that kind of film. END_OF_DOCUMENT_TOKEN_TO_BE_REPLACED