When things avoid intention, part one: Semantics, and shame

If you are reading this, then take it as proof positive of two things. One, the attempt to put an end to my existence that was promised for a certain date did not go ahead or quite as planned. Exactly what happened is irrelevant. The important point is that I was not found dead. END_OF_DOCUMENT_TOKEN_TO_BE_REPLACED

Violence keeps the world in line. Get over yourselves, passives.

Every so often, when the behaviour of curebies or normalists gets so obnoxiously bigoted that just reading about it makes my neurochemistry do backflips, I start asking people one question. Why are you not fighting back in some manner? As the example of the Black Panthers who frightened the NRA into supporting a firearm restriction law in 1967 proves to me, even threatening to go around armed makes the norms react with deep, irrational fear. END_OF_DOCUMENT_TOKEN_TO_BE_REPLACED

Iron Sky was made independently on an admitted budget of about seven and a half million Euros. I do not know if this rule applies with independent European cinema, but in Hollywood, when a studio admits to spending seven and a half million the reality is usually that they spent closer to ten or twelve million. Having said that, Iron Sky also trounces Hollywood in a number of ways. It is not a perfect film by any means, but it is far better than it has any right to be when all of the elements are examined individually.

Everyone who is old enough to be admitted to a theatre showing films like The Devil’s Double without adult supervision knows what a Nazi is. But few people know that there is one of those insane conspiracy theories circulating that has it that the Nazis established a base on the dark side of the moon, where they plot to one day take over the world. This conspiracy theory forms the basis of Iron Sky‘s plot. The year is 2018, and an American President sends people to the moon as an approval ratings stunt. Although the moon landing in the story is grossly oversimplified, as are much of the science elements, the sequence in which the astronauts discover Nazis and a Swastika-shaped base really put the hook in me.

But I would not be going to the effort to write about this film if not for one thing. You see, the astronaut that ends up being taken into the Nazis’ moonbase as a prisoner is, like eight point eight million other Americans, black. The character, James Washington, is played by one Christopher Kirby, a man tall enough to stand toe to toe with Götz Otto and not get laughed at. The entire film is a parody of American politics, but it takes the unusual step of delivering the satire by paralleling and contrasting American behaviour with that of one of the few regimes that we can all agree deserved to get its arse kicked by Americans.

A lot of the jokes in Iron Sky skirt so close to being offensive or in bad taste that it is difficult to watch them until the punchline is delivered, whereupon one looks back and laughs. In the first act, Washington is injected with some form of chemical concoction that turns him “white”. I am not sure whether this effect was intentional or not, but during the parts of the film in which Washington is meant to appear “white”, he does not look it. Yes, there are all different tones of what we call black, just like there are all different tones of white. But Washington during these parts of the film looks more like a black man who has been receiving absolutely no dietary iron since he was fully-grown (if ever). This, in itself, would mean nothing, but for reasons best known to the filmmakers, everyone including other Americans insists on addressing him as if he were well… white.

If anyone out there in the land of the ‘net who is black can help me better understand this aspect of the film, then please enlighten me. It is a bit confusing and disconcerting, in a deeper sense, to behold.

Also worth noting is that far from feeling admitted into a world of (relative) privilege or heightened ease of living, being made “white” makes Washington feel as if everything has been taken from him. This is a great touch to the story, and I applaud Iron Sky‘s makers for not going the ignorant route and showing Washington living it up as a white man. You could darken my skin until I disappear on a lit street at midnight, but you will never give me the ability to understand what it is to be black. Add to this that whatever else Washington is, he was obviously privileged enough in his normal life to be allowed to visit the moon (an expensive endeavour). So not only did the moon Nazis rob him of his most uniquely identifying characteristic, they robbed him of everything he was connected to as himself. Nobody recognises him in his “white” form, making the incredulity that the heroine displays at his reactions all the more ironic.

This is an awesome plot point because you can take any minority group, whether it be Hispanics in America or the autistic around the world, just to name two examples, and apart from some cosmetic changes to the mechanics, the story plays exactly the same way. 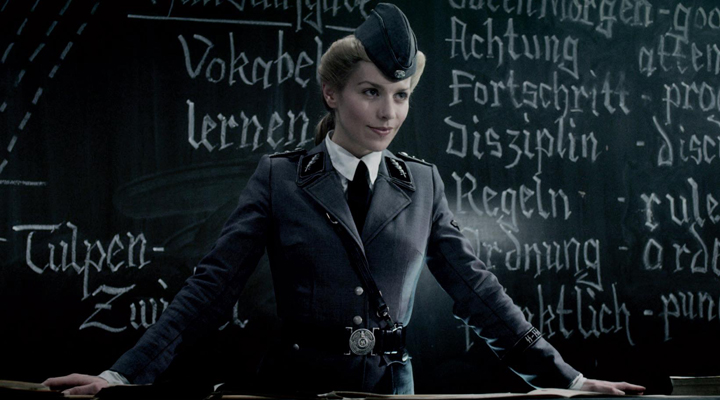 Another awesome plot thread in Iron Sky revolves around the Charlie Chaplin film The Great Dictator. On the Nazi moonbase, the heroine, one Renate Richter (portrayed by Julia Dietze), teaches propaganda to the children who appear to have grown up on the moonbase. Leaving aside the physical and immunological complications of this for the time being, you would be inclined to think that it would be absurd for Nazis who want to make their young believe in the cause watch this film. And you would be right. What the Nazis show to the children is a severely edited form of The Great Dictator. I am not sure what else is in the ten minute edit that Renate shows to the children, but all we see in Iron Sky is Charlie Chaplin playing with the world globe. Renate is clearly unaware that this is an edit. Later, when she is wandering what appears to be New York with Washington, she happens upon a theatre that is showing The Great Dictator. She goes in proclaiming to Washington about what a wonderful film it is, and comes out very distraught, her viewpoint of both the film and Adolf Hitler thoroughly shattered.

Many people have said that editing is the soul of cinema. Roger Ebert proclaimed that in the case of The Brown Bunny, editing was its salvation. But as I have mused about in the presence of others, it is remarkable how editing can change a film. You would be hard-pressed to find a more anti-Hitler film from the 1940s than The Great Dictator. But chop it down enough in just the right places…

Is Iron Sky a great film? Hardly. Although it is a great effort and a novel idea, it is also very clumsy with a lot of its content. The President shown in the film would have been a good riff upon the Presidency of the United States, but it goes too far with too little depth. The Republicans might think they can bully the rest of the world into submission, but the current President is a horse of a very different colour to his predecessors, and I do not mean just racially. Add to this the absolute lack of subtlety in what Iron Sky‘s President does as a plot point, and basically every scene involving her falls flat.

But when Iron Sky gets it right, and this means any scene with Julia Dietze or Christopher Kirby in it, it gets it right to a degree commensurate with films that cost at least twenty times as Iron Sky did to put together. Plans for both a sequel and a prequel have been announced, both of which I hope benefit from more work on the screenwriting stage. A few tightenings and further explorations here and there would have done the finished result a world of good.

In other words, go and see it. We need to support films that are made for and by intelligent grown-ups a lot more. And in spite of its shortfalls, Iron Sky is mostly that.