You cannot keep a good, awesome, or even irrepressible performer down. Exhibit A is the ageing performer known as William Shatner. As of March 22 in 2012, William Shatner is eighty-one years old. But as Henry Rollins said during a speech about his own work with Shatner on a musical project, the man still has an enthusiasm and energy that a man half his age would be proud of. In fact, I can tell you that if I live to be half of Shatner‘s present age, I am unlikely to have a tenth of the energy that he reputedly performs with today. But enough about comparisons. In this entry, the subject is William Shatner and his side-career in the field of music. Essentially, Shatner has released three albums during different phases of his career. The first, The Transformed Man, was released whilst he was still starring in the original Star Trek television series. The second album Shatner released, Has Been, was released in 2004. But the album that inspired me to write about Shatner‘s music today, Seeking Major Tom, was released late in 2011, and Odin and I can both tell you that it is awesome beyond words.

I own a CD copy of The Transformed Man. Four of the songs are medleys consisting of spoken-word readings and covers of existing songs by Shatner. The two most notorious covers on the album are of Bob Dylan‘s Mr. Tambourine Man and The Beatles‘ Lucy In The Sky With Diamonds. Opinions that I have read compare the former to the sound of a man rambling during a bad drug trip. The latter has been declared by consensus to be the worst “massacre” of a Beatles song, ever. In fact, this is a good example of why creative artists should fear their fans most. Whilst I have heard some Beatles songs that were not too bad, the whole “everything the Beatles wiped their arses with is scared” thing some fans put on only serves to put me off their work. One of the reasons I enjoy William Shatner‘s work so very much is precisely because people go out of their way to hang shit on him, and it does not diminish the awesomeness of his work in the slightest. Shatner‘s version of Lucy In The Sky With Diamonds is awesome precisely because it sounds like he inhaled everything in South America a few minutes before he recorded it.

Has Been is a very different album from The Transformed Man. Given that there is a twenty-six year gap between the two (1968 to 2004), this should surprise nobody. Most of the material on the album was composed by Shatner and a gentleman known professionally as Ben Folds. The one cover on the album is a cover of the Pulp song Common People, which is one of the best pieces of pop performed/spoken on the behalf of the poor (the cover I mean, not the original). Shatner knew enough about being poor as a result of having been taken to the cleaners by his first wife in the first demise of Star Trek to make this cover very convincing. This is also the album that Henry Rollins graced with his presence, on the song I Can’t Get Behind That. Rollins tells a good story in one video that is partly floating around YouChoob about how he got to work with Shatner on the song.

On Has Been, there is one song in which Shatner states, very matter-of-factly, that by the time you hear this, he may well be dead. At his age, that is not an unreasonable expectation. Fortunately, he managed to defy it for one more album. 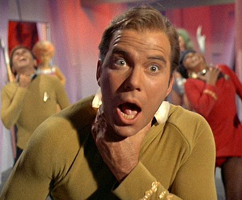 Which brings us to Seeking Major Tom, Shatner‘s 2011 epic double album. Clocking in at over 95 minutes, Seeking Major Tom is quite an endurance test for any listener, even if they are extremely familiar with the awesomeness of Shatner. Shatner goes all out on this album. Most of the material is covers of existing numbers, but done in an impeccably Shatner-esque manner that is to music what Ed Wood was to film.

There are twenty songs on the two discs that comprise Seeking Major Tom. The one currently being used as a “flagship” is a cover of Bohemian Rhapsody. Yes, that Bohemian Rhapsody. You can see the official music video for it here. It is truly fukking terrible, but like the Muppets version, or the abridged version that appeared in the Wayne’s World film shortly after Freddie Mercury‘s death, it has almost certainly caused the ghost of Freddie to turn to Odin, smile, and say “wow, I really did manage to make a difference”. None of the men who are credited with composing the song Iron Man are dead yet (at least as of this writing). Shatner‘s cover will not motivate any of them to say that to Odin (Type O Negative‘s cover of the song they renamed their band after, on the other hand…). In fact, it is probably the weakest cover of the many that populate the album, but it is still enough that the first time I heard it, I was only about a third of the way through before I was laughing so hard that tears were streaming out of my eyes. For those who would like to hear the cover of Rocket Man that Shatner recorded in 1978, well, for now we can content ourselves with the version that appears on this album. It is pretty much the same except for the lounge singer act you can see in this video.

If you were looking for a pertinent point to this writing, then you are barking up the wrong tree. Although, much like Frank Zappa‘s constant shifting of emphasis in peculiar ways, William Shatner‘s way of enunciating song lyrics like every word is its own sentence does resemble a number of autistic people in everyday life. But that is a very loose connection that does not really bear much exploration here. What we should be taking from this writing is just as the subject line says. William Shatner is awesome.

If you have read this far, thank you for doing so. Should you happen to further investigate the awesomeness that is William Shatner as a result of reading this, then I am sure he thanks you, too.