No, school is not for fools, it is just designed for fools. There is a difference.

One thing that the video gets right is how schools are designed to beam messages into the student body’s head without question or elaboration. Eat, absorb, consume, and so forth. In an increasingly overpopulated world where every subsequent generation has too many children for the previous lot of adults to cope with, this is basically a case of taking the easy way out. And that is the point we are going to go over in this article. Namely, that schools take a one size fits all approach, and thus the easy way out. Unfortunately, when you are autistic, not known to be such, and have multiple sensory issues that can lead to wanting changes to your situation so desperately that you will do anything in order to effect them, this can have devastating consequences and effects. The training of teachers and other school staffers to properly respond to this has improved quite dramatically since that song was record. In other words, it has the virtue of being there at all. But it still has quite a long way to go in the sense that teachers need to understand what the word individual really means. And by understand, I mean grok. 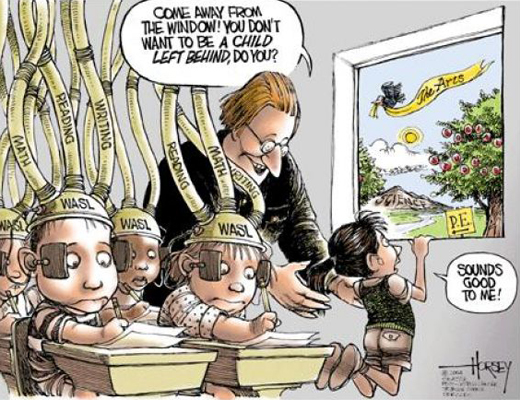 Part of the problem as it exists today is that schools and education systems are inadequately funded. And no, that is not a call for the beleaguered poor, working, and middle classes to pay more tax. They are paying too much, especially in comparison to what they get back for it, as it is. If the richest one to twenty percent of society were made to pay for just what they use, instead of being excused and everyone else being made to make up for it, then what I propose in my next statement would be easily affordable. And what I propose is that student to teacher ratios be reduced to a maximum of fifteen to one. No, it is not a coincidence that the class described in the opening scene of Kronisk’s Mirror consists of sixteen cubs. That is slightly more than the ratio I describe as being ideal, but at least it is on the low end of the scale.

There are many artworks set in schools that demonstrate the end result of overcrowded classes perfectly. In place of students, we see a number of featureless metallic masks where their faces would be. No bodies, no nothing, just these featureless masks. I do not like to tell tales out of school (ha ha), but if I learned that this is how teachers in the school system of the 1980s and 1990s were specifically trained to think of the children and adolescents in their charge, it would not surprise me in the least.

The above image, satirising the whole “no child left behind” bullshit, is a very good illustration of this. No, granted, my experience of the education system is a little old, but all the warning signs of not a solitary thing having been learned by the powers that be are present and accounted for. The one lesson I am waiting for the powers that be to learn is that it is not the duty of a child to change every single thing about themselves to fit into your arbitrary and badly-designed criteria. If you want a child who would rather look out the window or have his senses stimulated by the computer in his home to spend 99.99% of his time with his eyes glued to a subject that brings him discomfort, you have to change the manner in which the subject is presented to suit him. Given the manner in which film studios practically fall all over themselves in order to try to suit the mythical Everybody, why our oh-so wise purveyors of “free enterprise” think that education should be exempted from this market failure that they like to promote as a feature has got me more than a little puzzled.

A number of times, when commenting on other peoples’ writings that have to do with such things as creationists embarrassing themselves, I have stated that science education in our schools is lacking. And it is. You see, as is ruminated about in songs like School’s For Fools at great length, our school system presently expects its wards to simply absorb and regurgitate information, rather than provide them with the tools to learn information for themselves and make use of it.

And therein lies the rub. Rather than create a system for and reflecting the interests of the individuals having to contend with it, a lot of the education system as it exists in multiple countries today has multiple people who should not be in any position of say at all sticking their heads in. The Alex Proyas film Dark City depicts its primary antagonist not as a singular individual but as an entire race of creatures that share a singular group or hive mind. As Richard O’Brien does a smashing job of explaining to Jennifer Connelly‘s character in one scene, it is a very weird and unhappy existence to have all of your memories shared with a hive of creatures who also share at least some of your feelings and ideas. Unfortunately, again, conservatives have this peculiar habit of taking what a creative mind phrases as being a nightmare or a very unpleasant situation, and mistaking it for something that creative mind sees as a way forward for future generations. One of the unspoken implications of the illustration I have placed above is that the Western education system seriously thinks that all children should not have any thoughts, feelings, or ideas that their peers do not share. A form of mass mind-rape, if you will. And the other unspoken implication, through the child who does not want to have all of his thoughts handed to him in a hive mind, is that the children can either go easy or hard with this.

But to get back to a point I was about to start on a few paragraphs ago, the system as it exists both now and when I was a boy seems more concerned with learning by rote than with actual learning. Teaching a child, an adolescent, or even an adult, how to learn things independently and without an agenda-driven ego distorting the signal for them should be the focus. Do not tell your child that they are expected to believe that Shakespeare is the greatest author who ever drew breath. Instead, teach them the fundamentals they require in order to read Shakespeare on their own, without you strapping blinkers to their heads, and if they come to the conclusion that your claims that Shakespeare wrote in the language of the “common man” are nonsense, be happy about it. If your child comes forward with a hundreds-of-words essay detailing why such a claim cannot be taken seriously, be doubly happy. Because your child has learned to think independently of you, and thus will not be shaking and shivering in fear when he is taking his first steps into what we laughably refer to as an adult world. Or running in fear of you into it, as the case may often be.

Which brings me to the statement in the image I have just included with this text. Human beings, especially children, learn better when there are challenges. And by challenges, I mean goals that stretch them out of their comfort zone, into new realms of information. I do not mean some grouchy pusbag who thinks they are an adult and that being an authority naturally flows from that hitting them in the back of the head with a newspaper telling them to learn this or else. The law that the worst, most idiotic ruler the United States has thus far signed into power was called No Child Left Behind. What a load of bollocks. More like No Group Left Unpunished For Failing To Fit In, No Minority Left Unbullied For Their Minority-Status-Related Difficulties, No School Left Unbullied For Problems Relating To Ingoring Funding Inadequacies. Children do not aspire to be “left behind” in the true sense of the words. But just as every person has different goals or ideas concerning what they want out of life, so too does every child have a different idea of what being left behind means. A child who practically dines on numbers and shits massive streams of calculations might think a cirriculum based on nothing but maths and English is great fun. But to a child who enjoys looking at the difference between his native language and another, or critically analysing the fiction he comes across, school will rapidly start to feel like having been jailed on the basis of being a child. And believe me, if your goal is genuinely to teach them something, that is the worst possible situation for the both of you to be in.

One of the many reasons a law based on bullying schools (and by extension, the children) for not having pants-shittingly high test scores cannot work is because of the role that poverty plays in suppressing test scores. Poor children do not learn as well as rich children. Because it is difficult to learn new information when you are hungry, frightened, and wondering where your next pair of pants will be coming from. And more and more excusings of the rich from paying their fair share of the taxes, or indeed even what they actually use (which, as has been established, amounts to a lot), will only make this worse. Being a “gifted” child in a family that can only send their children to public schools and keep sending them there even when that child is crying that they want the abuse from teachers and peers to at least dial down a notch or three is a story of endless heartbreak. Or as Gibby Haynes put it so well in a song, hope is lost, you’re bleeding now, your dreams forever black.

For almost all of the past century, children have been constantly berated with a message of how they must pick up their game, how they must do better, how they must be lazy or useless when they do not eat teacher’s shit and say “yum, please sir, I want some more”. Well, I am here to tell you that it is the schools, the society those schools serve, and the people who benefit the most from having a basic-educated workforce (say it with me now, richest one percent…), who need to lift their game. Because for something that is as important to the future wellbeing of society as education and child development, the ruling class’ habit of allocation as little as they could get away with if populations and their growth were still stuck in the 1900s (I mean the decade, not the century) is simply not on. More teachers are needed, more money is needed to pay those teachers, and more teachers need better training so that less children come out resembling me when they are adults.

But hey, what would I know? I am just one of the guys you (the education system) failed and believe you can simply sweep away like a failed chemistry experiment.